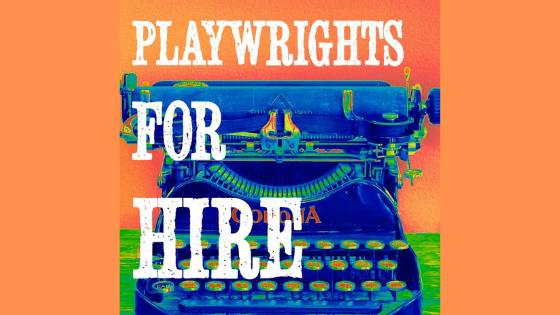 Pay a pound – Get a play!  Playwrights For Hire at Exeter Fringe. Showcase on 4 July at The Barnfield Theatre.

It started out as a random crazy thought. I’m walking down a road in London August 2017 and a young guy is sat at a typewriter. The cardboard sign in front of him says ‘POEMS. £1’.

You pay. He types. Hands you a poem.

That couldn’t work with plays though, right? Right?

Fast forward to September 2018 and we’re in Rumpus Cosy for Plymouth Art Weekender. There are four playwrights sat at tables and a queue of people dropping pounds into a tin. We write 44 one page plays that day. A few months later we try it again in Theatre Royal Plymouth with five writers and write 64!

And now we’re at Exeter Fringe but this time with a twist. We’re not just going to write the plays. We’re going to perform them too! It couldn’t work, right? Help us find out all this week!

How Does it Work?

Find one of our team of Devon and Cornwall based playwrights at the Fringe venues throughout the week. Timetable here:

A one page play for a pound! What a bargain! Feel like a big time producer funding the arts!

All the money raised writing the plays will be donated to Concern International.

Tell us what kind of play you want! Are you after a comedy, a drama, a rom-com etc? Do you want it be be about the current political crisis? A conspiracy theory involving squirrels? Or a touching tribute to friendship set at Rougement Castle?

Come and see the plays performed on Sunday 4th July 2019 at 2pm in The Barnfield Theatre!

You’ll also get a copy of your play to keep and treasure forever-and check out the plays we make during the week on social media!

Ainsley Harriott adjusts his bow tie. His heart is pounding.

He looks to his left and stares blissfully into the eyes of his beautiful blushing bride.

She looks back at him, and giggles.

Together they look back at the vicar.

VICAR: We are gathered here today in the sight of God, and in the face

of company, to join together Ainsley Harriott and Yimmtura Leafeat in holy matrimony.

Yimmtura’s big eyes start to tear up. She has never felt more connected to herself and the Earth, having found a true life partner.

VICAR: If anyone can show just cause why they may not be lawfully joined together, let them speak now or forever hold their peace.

The star-crossed couple turn simultaneously to look out over their collected family and friends. On the left, Ainsley has invited every single contestant of Ready Steady Cook – and on the right, Yimmtura has hundreds of wrinkled relatives.

They start to turn back, relieved, when –

Sharp intakes of breath as everyone in the church turns to look at the door, which has been kicked open by Jeff Goldblum.

JEFF GOLDBLUM: I object to this wedding!

VICAR: On what grounds Mr Goldblum?

JEFF GOLDBLUM: Please, call me Jeff, everyone else does.

Yimmtura is a Stegosaurus! She always has been.

Your TV chefs were so preoccupied with whether or not they

could marry a dinosaur,

that they didn’t stop to think if they should!

JEFF GOLDBLUM: So am I, Vicar! I’m in love with the safety of humanity!

Yimmtura’s Mother stomps over and takes a big chunk out of Jeff Goldblum, even though she is a herbivore